Various news outlets have reported that Met. Saba Esber of Hawran has been elected patriarchal locum tenens. It should be remembered that this role has no other responsibility than to facilitate the election of a new patriarch. Although Met. Saba has been mentioned in some media speculation as one of the more likely candidates for the patriarchal see, being elected locum tenens has not historically been an indicator of being a preferred candidate-- in 1979, the relatively young Met. Elias Kurban was elected locum tenens prior to the election of patriarch Ignatius IV.

Some Words about Going up to Receive

The Poor are our Gateway to the Kingdom

The Movement in the Heart of the Church 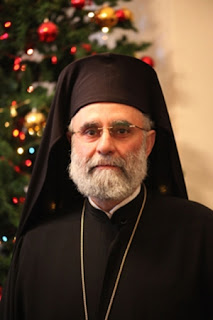 From the website of the Archdiocesse of Hawran and Jebel al-Arab (slightly edited), a biography of Met. Saba:

Is the Metropolitan of Bosra Horan and Arab Mountain since 1999

Became the priest of St. Michael Church in Lattakia in 1990
Promoted to be an archbishop and was assigned to be Patriarchal representative in 1999

Was elected by the holy Antioch council to be the Bishop of Bosra, Horan and Mount Arab Parish

Has numerous articles and theological and biblical studies in Al-Nour and Al-Arabia periodicals as well as the parish periodical. The Archdiocese of Bosra Horan has witnessed a great revival affecting human resources level. Several chanting choirs and religious study groups were established in many villages for children and the youth. The revival has also tackled the construction level. Many churches were built and many other churches were renovated. Bishop Saba has established many productive projects that proved to be beneficial for the parish in general.

Established Al-Farah publication and translation house. Al-Farah publishing house has issued tens of religious and educational books as well as Al-Farah children magazine in both Arabic and English. This is the only Orthodox magazine for children in Antioch.

The parish has produced a documentary called “The Forgotten Church” which highlighted the importance of Horan region fo the Church of Antioch as well as for civic history.