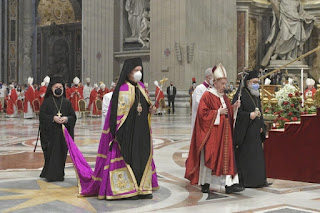 Recently, the world followed on television and online the celebrations of the Feast of Saints Peter and Paul at the Vatican in the presence of His Beatitude John X and an accompanying Antiochian delegation and with the participation of a delegation from the Patriarchate of Constantinople headed by Metropolitan Emmanuel of Chalcedon.

Observers of events in the Orthodox Church have commented on a number of images that appeared during this celebration, including:

- That the Patriarch of Antioch was dressed in the clerical robes that he wears outside the liturgy.

- That the Metropolitan of Chalcedon was wearing the robes that bishops wear during the liturgy, with a priest walking behind him holding up the edge of his mantiya.

- That the delegations from Constantinople and Antioch did not sit in the same place inside Saint Peter's Basilica.

In addition to the images that have appeared on social media, the Phanar's news website and Greek news sites close to the Phanar reported the event in the following manner: "During the Divine Liturgy that took place today, Tuesday, June 29, 2021, at the Basilica of St. Peter of Rome, by Pope Francis, a delegation of the Ecumenical Patriarchate led by Elder Metropolitan Emmanuel of Chalcedon, along with Patriarch John X of Antioch, attended the service."

These observations lead to a number of questions:

- Does ecclesiastical etiquette not require Constantinople's representative, Metropolitan Emmanuel, to follow the example of the Patriarch of Antioch and to be content to wear clerical dress and not liturgical vestments?

- Is it appropriate for there to be two delegations representing the one Orthodox Church taking part, as though they were two churches unconnected to each other?

- What is the sense in giving the impression in news reports that Constantinople's representative has precedence over the Patriarch of Antioch?

Of course, no one either in or outside the Orthodox world is ignorant of the fact that Constantinople wants to give the impression that the Patriarch of Constantinople is "first without equals" and that his position in the Orthodox world is different from that of the other churches. This is something alien to tradition and is a contentious issue within the family of Orthodox Churches. Perhaps this frantic quest to establish this differentiation is causing the Phanariots to become estranged from reality and to live in their own imaginary world.

The pictures have spoken on the Feast of Saints Peter and Paul in Rome and they have revealed the Church of Antioch's fidelity to tradition and the crisis that is sweeping the Orthodox world on account of the deep-seated superiority complex of the Patriarchate of Constantinople and its representatives, manifest in the unparalleled peacockery of its representative, cast into sharp relief by the simplicity of his host, the Pope, and the reserve of the Patriarch of Antioch.

The picture has spoken more and has vindicated what Orthodox have been saying for years about Constantinople's effort to practice an eastern papism. Will the leaders of the Orthodox world rise up before it's too late?