The Russian original can be found here.

On the Fourth of July, with the blessing of His Holiness Thodoros II, Patriarch of Alexandria and All Africa, in the Cathedral of Saint Nicholas the Wonderworker, Metropolitan Alexios of Carthage, exarch of North Africa, ordained Fr. Labro Kefallino to the priesthood. He had been ordained to the diaconate four days earlier.

Fr. Labro, 34 years old and married, will serve in the Islamic Republic of Mauritania. The majority of the country is within the Sahara desert and its population is over three million people. Its official religion is Islam. Until very recently, it was the last North African country in which the Orthodox Church had neither a church nor a parish. Fr. Labro is the first Orthodox priest who will serve in that land.

After the ordination, Metropolitan Alexios pointed out that that North African country is in a difficult situation on account of religious fundamentalism, Islamic extremism, political instability, a harsh climate and extreme poverty. He asked all to pray for Fr. Labro, who has been preparing the ground for a permanent Orthodox presence and witness in Mauritania.

Metropolitan George of Zimbabwe, representative of the Patriarchate of Alexandria in Athens was present at the ordination and congratulated Metropolitan Alexios for the extension of his jurisdiction into Mauritania, it having previously covered Tunis, Algeria, and Morocco.

July 10th: The Feast of St. Joseph of Damascus 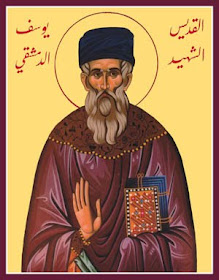 "The stars of Damascus are three: The Apostle Paul, John of Damascus, and Joseph Mouhana Al-Haddad." - Metropolitan Gabriel Chatila of Beirut (+1901)


If you have not yet read his life, do so here.

Also, of interest even if you can't read Arabic is an illustrated life of St. Joseph for children that can be found here.
Samn! at 11:40 AM 1 comment:
‹
›
Home
View web version